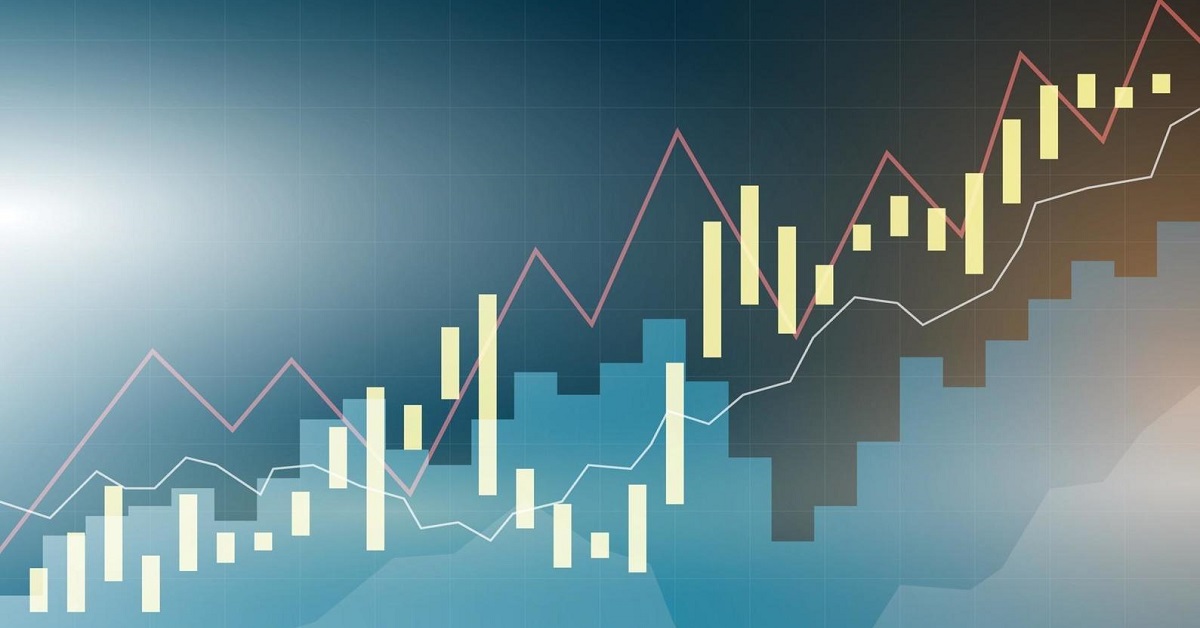 Chart patterns are another technical indicator and form of support and resistance lines. The two styles most widely followed are Japanese candle and Western-style chart patterns.

A few key differences exist between them:

What both kinds of chart patterns share is that both are useful because:

For all of these patterns, you can take a position with CFDs (contracts for difference). This is because CFDs enable you to go short as well as long – meaning you can speculate on markets falling as well as rising. You may wish to go short during a bearish reversal or continuation, or long during a bullish reversal or continuation – whether you do so depends on the pattern and the market analysis that you have carried out.

Not ready to trade with real capital? Open a CAPEX demo to trial your chart pattern strategy with $50,000 in virtual funds. 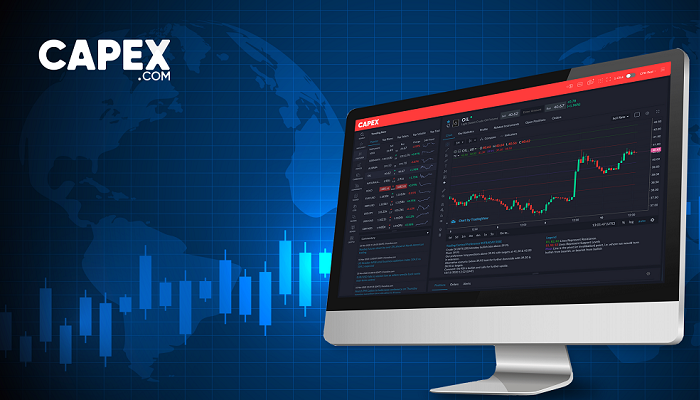 Candle patterns are a vast topic. Our goal here is to briefly present you to the most important among them. Read our comprehensive candlestick chart course for more insights.

Bullish patterns may form after a market downtrend and signal a reversal of price movement. They are a chart pattern indicator for traders to consider opening a long position to seek profit from any upward trajectory.

Bearish candlestick patterns usually form after an uptrend and signal a point of resistance. Heavy pessimism about the market price often causes traders to close their long positions and open a short position to take advantage of the falling price.

If a candlestick pattern does not indicate a change in market direction, it is what is known as a continuation pattern. These can help traders to identify a period of rest in the market when there is market indecision or neutral price movement.

Like Japanese candle patterns, Western chart patterns are indicators and forms of support and resistance.

As with candlestick patterns, you will have a much easier time remembering what these chart patterns mean if you understand the logic behind them.

Here are some of the most powerful reversal chart patterns in forex trading, stock trading, and even cryptocurrency trading, indicating that a trend may be about to change direction. 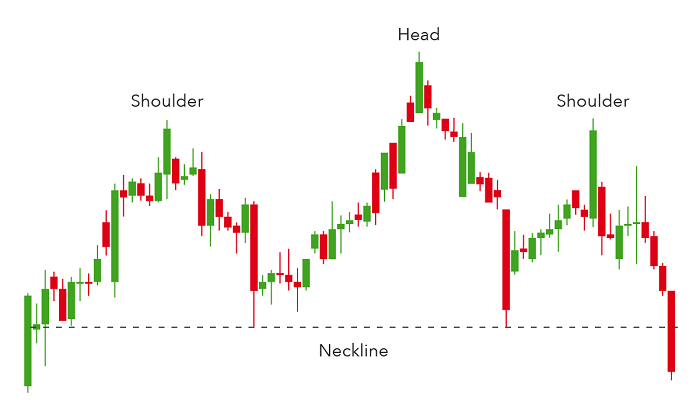 Head and shoulders is a chart pattern in which a large peak has a slightly smaller peak on either side of it. Traders look at head and shoulders patterns to predict a bullish-to-bearish reversal. 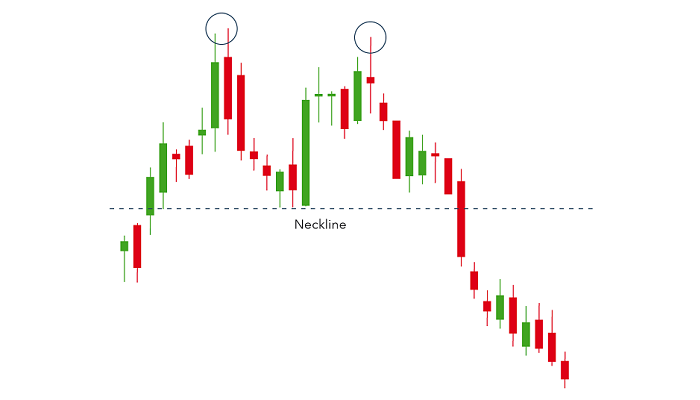 A double top is another pattern those traders use to highlight trend reversals. Typically, an asset’s price will experience a peak, before retracing back to a level of support. It will then climb up once more before reversing back more permanently against the prevailing trend. The same logic applies to a triple top. 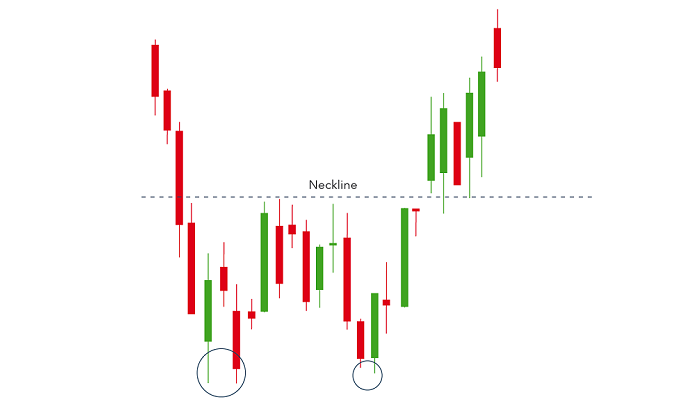 A double bottom chart pattern indicates a period of selling, causing an asset’s price to drop below a level of support. It will then rise to a level of resistance, before dropping again. Finally, the trend will reverse and begin an upward motion as the market becomes more bullish.

A double bottom is a bullish reversal pattern because it signifies the end of a downtrend and a shift towards an uptrend. The same logic applies to a triple bottom. 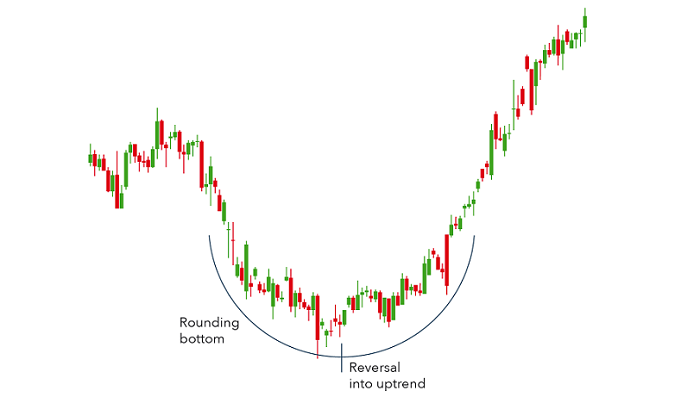 A rounding bottom chart pattern can signify a continuation or a reversal. For instance, during an uptrend an asset’s price may fall back slightly before rising once more. This would be a bullish continuation.

Traders will seek to capitalise on this chart pattern by buying halfway around the bottom, at the low point, and capitalising on the continuation once it breaks above a level of resistance.

Wedges form as an asset’s price movements tighten between two sloping trend lines. There are two types of wedges: rising and falling.

A rising wedge is represented by a trend line caught between two upwardly slanted lines of support and resistance. In this case, the line of support is steeper than the resistance line. This pattern signals that an asset’s price will eventually decline more permanently – which is demonstrated when it breaks through the support level. 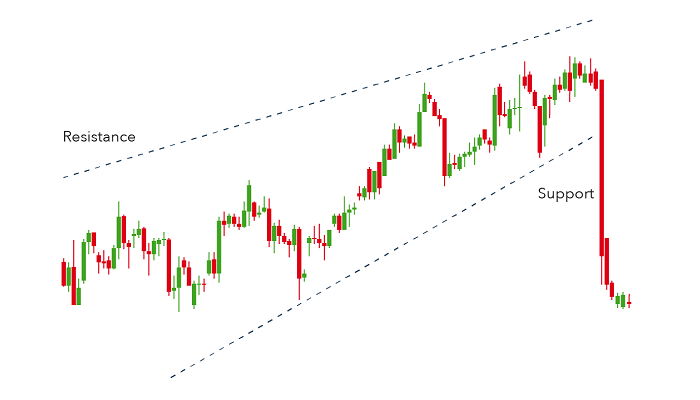 A falling wedge occurs between two downwardly sloping levels. In this case, the line of resistance is steeper than the support. A falling wedge is usually indicative that an asset’s price will rise and break through the level of resistance, as shown in the example below. 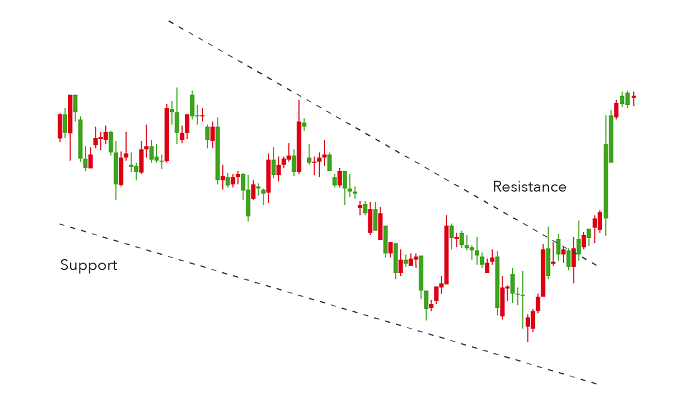 Let’s get familiar with some classic Western continuation patterns. As the name suggests, these patterns imply trend continuation rather than reversal.

Studies have shown that the longer the price pattern takes to develop, and the larger the price movement within the pattern, the more significant the move once the price breaks above or below the area of continuation. To spot them, though, you’ll need a platform with powerful charting tools: such as the CAPEX WebTrader or MetaTrader 5. 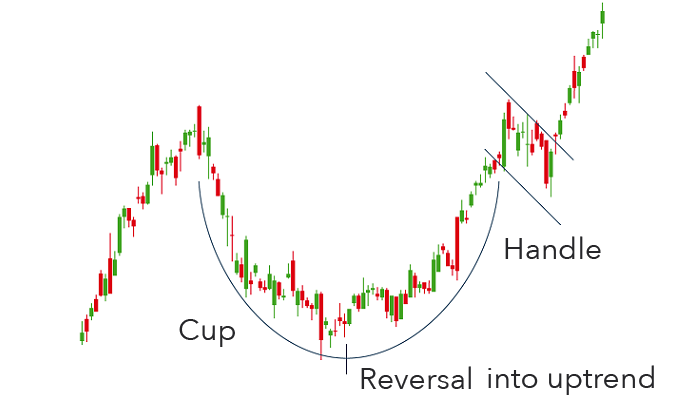 The cup and handle pattern is a bullish continuation pattern that is used to show a period of bearish market sentiment before the overall trend finally continues in a bullish motion. The cup appears similar to a rounding bottom chart pattern, and the handle is similar to a wedge pattern.

Following the rounding bottom, the price of an asset will likely enter a temporary retracement, which is known as the handle because this retracement is confined to two parallel lines on the price graph. The asset will eventually reverse out of the handle and continue with the overall bullish trend. 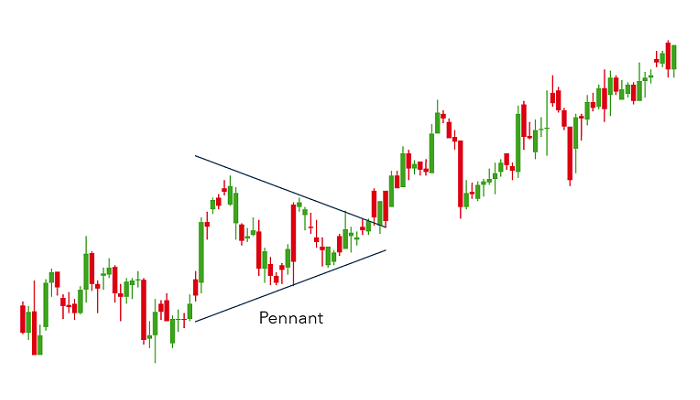 Pennant patterns, or flags, are created after an asset experience a period of upward movement, followed by a consolidation. There will be a significant increase during the initial stages of the trend before it enters a series of smaller upward and downward movements.

Pennants can be either bullish or bearish, and they can represent a continuation or a reversal. The above chart is an example of a bullish continuation. In this respect, pennants can be a form of bilateral pattern because they show either continuations or reversals.

While a pennant may seem like a wedge pattern or a triangle pattern – explained below – it is important to note that wedges are narrower than pennants or triangles. Also, wedges differ from pennants because a wedge is always ascending or descending, while a pennant is always horizontal. 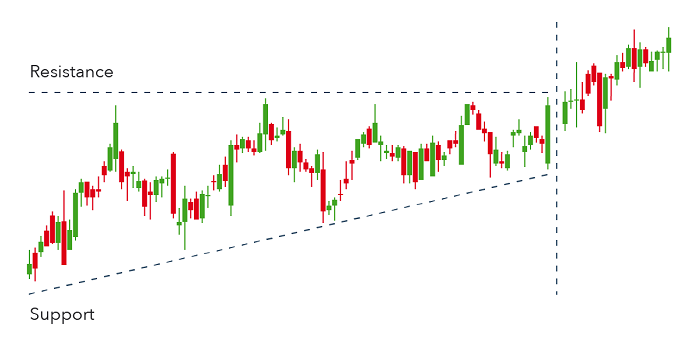 Ascending triangles often have two or more identical peak highs which allow for the horizontal line to be drawn. The trend line signifies the overall uptrend of the pattern, while the horizontal line indicates the historic level of resistance for that particular asset. 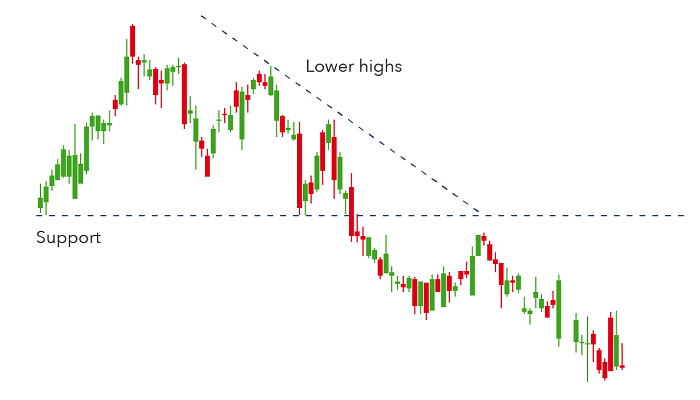 Descending triangles shift lower and break through the support because they are indicative of a market dominated by sellers, meaning that successively lower peaks are likely to be prevalent and unlikely to reverse.

Descending triangles can be identified from a horizontal line of support and a downward-sloping line of resistance. Eventually, the trend will break through the support and the downtrend will continue.

Chart Patterns That Can Be Continuation or Reversal

These can serve as reversal or continuation patterns. What they share is that the price range converges into a narrower range until price breaks out either in the direction of the trend (continuation) or in the opposite direction (reversal). 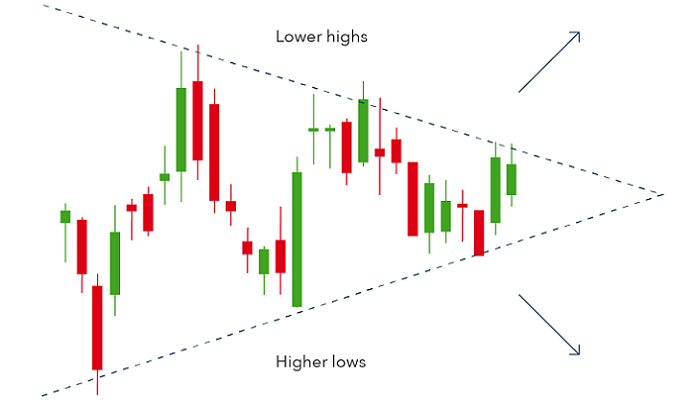 The symmetrical triangle pattern can be either bullish or bearish, depending on the market. In either case, it is normally a continuation pattern, which means the market will usually continue in the same direction as the overall trend once the pattern has formed.

Symmetrical triangles form when the price converges with a series of lower peaks and higher troughs. In the example below, the overall trend is bearish, but the symmetrical triangle shows us that there has been a brief period of upward reversals.

Chart patterns don’t come about by magic, they’re pictures of unchanging crowd psychology. The patterns repeat because crowd behavior repeats when subject to fear, greed, and indecision, as these feelings permeate the markets in response to current events and how markets interpret them based on their prior expectations.

It’s important to determine whether the market is trading or consolidating. This is because it will reveal what type of chart patterns work best for each trading environment.

Look at the whole price picture, don't just focus on the chart patterns. What you need is for this story to confirm your price action pattern. Everything else must point in the same direction. Finding the proper direction to place your trades will help you to increase your win rate, under normal market conditions.

Chart patterns work best in conjunction with a good price location which can add confluence to your trade. That price location can either be a support/resistance level, swing high/low points or some pivot points. The location can even be a technical indicator if you combine the two.

Finally, a chart pattern trading strategy requires written trading rules that can be adjusted along with changing market conditions

The most important thing to remember when using chart patterns as part of your technical analysis is that they are not a guarantee that a market will move in that predicted direction – they are merely an indication of what might happen to an asset’s price.