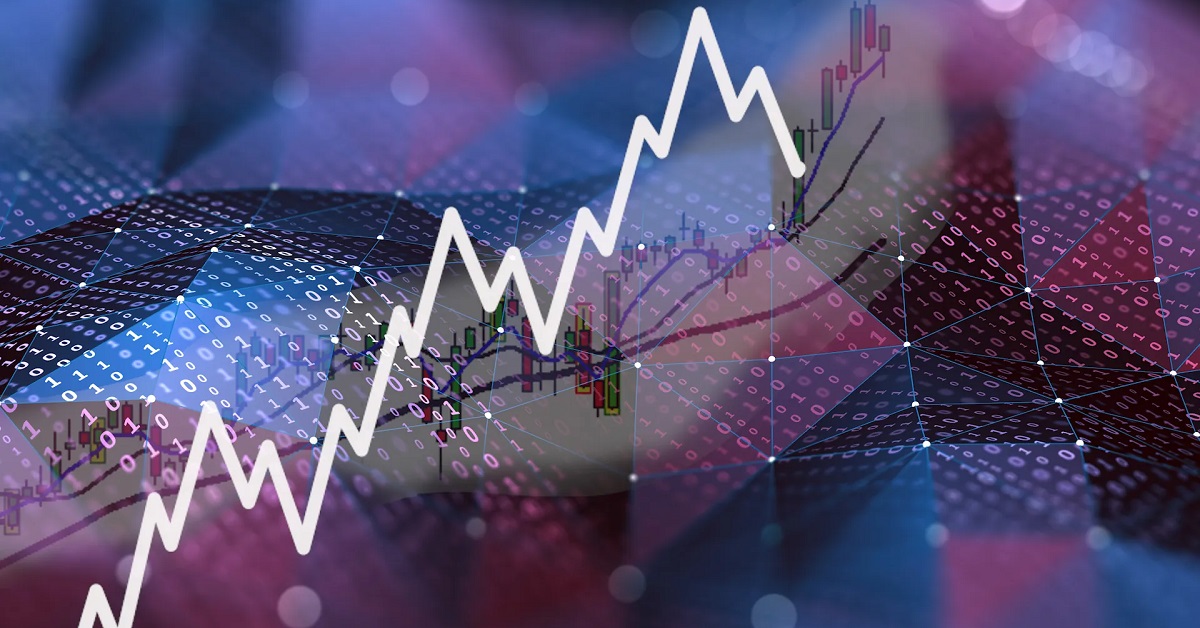 Elliott wave can be applied in any market, on any time frame, with any account size. But like anything worth learning, getting there takes patience. Through practical, easy-to-understand rules and guidelines, and step-by-step specifics, you will learn to apply what works best for you. Whether you intend to use this Elliott Wave research as your point of entry for the method, as a quick refresher, or as a handy reference guide, you will turn to its contents time and time again.

How to use this guide:

R.N. Elliott developed Elliott Wave Theory in the 1920s. Mr. Elliott discovered there is no chaos in the markets, but on the contrary, this is a natural order in the markets that manifests itself in wave patterns, which continually repeat themselves. These wave patterns continually repeat themselves over and over again in forex trading, stock trading, gold trading, and even cryptocurrency trading. The wave patterns are also fractal in nature, which means that you can subdivide these waves into smaller and smaller waves and they had the same pattern, just a different degree.

The key to the Elliott Wave Theory is to learn how to correctly detect these wave patterns that tend to occur over and over again in the markets. These wave patterns can be divided into basically two kinds, the trending wave, and the non-trending wave. Some people call them ‘impulse waves’ and ‘corrective waves’. The markets tend to trend only 20% of the time and they go into corrections 80% of the time. The impulse wave has five price movements. Three of them are in the direction of the market and two of them are in the opposite direction of the market. 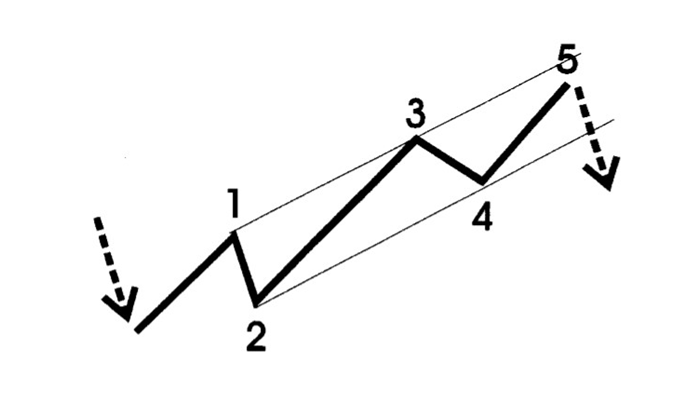 These five waves can also be broken down into smaller waves. Each impulse wave has five waves and each correction has 3 waves. 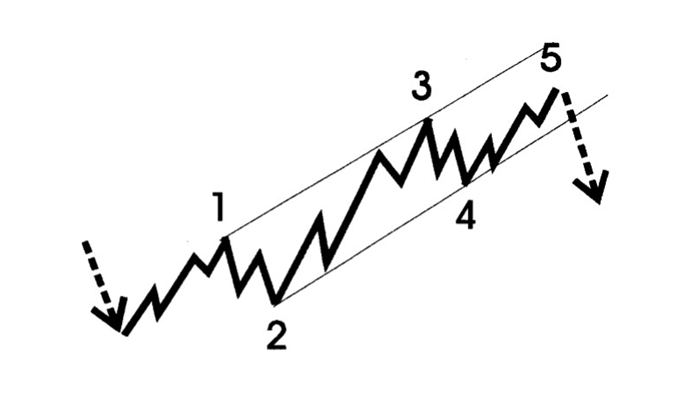 The Elliott Wave corrective waves can also be broken down into a smaller degree. Waves A and C are in the direction of the reaction. This would illustrate the reaction in a bullish trend. 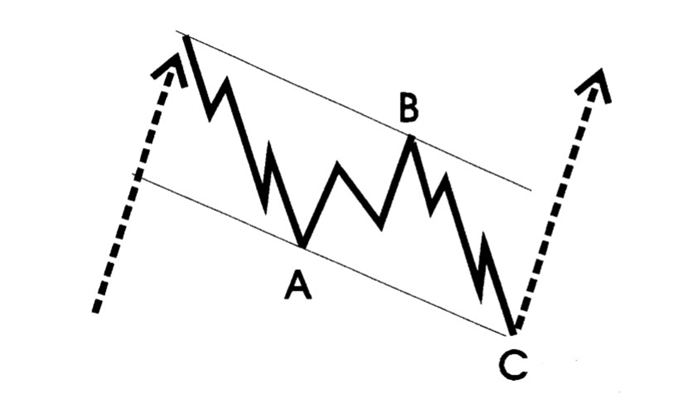 It should be very easy now to distinguish between the trends of the market and the corrections.

You must remember that the possible number of wave degrees is infinite. You can only trade so many waves down. The smallest detectable wave pattern would be using a 1-minute candlestick chart. The advantage of having different degrees of waves is that you can trade the degree that you are most comfortable with. Day-traders might trade the Sub Minuette Wave Degree and intermediate investors might use the Primary Wave Degree to trade.

Recognizing the patterns of the waves as they are developing is the most important thing you can do. Many Elliott Wave technicians can correctly analyze a completed chart with the correct patterns, but what good does that do. You need to do it as it is happening. You can correctly determine where you are in the Elliott Wave pattern, as it is unfolding, it will tell you the levels the market will rise or fall to. That’s the importance of the Elliott Wave theory.

Now let’s look at the various Elliott Wave Patterns in a very strict manner according to the rules followed by Elliott Wave technicians:

Example of a Double Zigzag

The above is a modern representation of the Double Zigzag using the labels WXY instead of ABCXABC. This is more consistent because this way 2 zigzags of lower degrees get corrected to each other by waves of higher degree.

Targets for Elliott Wave 3 or C

To begin with, you can draw a channel as soon as waves 1 and 2 are finished. Connect the origin of wave 1, which has been labeled as zero, and the end of wave 2. then draw a parallel line from the top of wave 1.

Generally, this channel is regarded as not being very useful, but it is, First of all, the parallel line services as an absolute minimum target for the 3rd wave under development. If the 3rd wave can’t break through the upper line or fails to reach it, you are probably dealing with a C wave instead of wave 3.

Furthermore, the baseline from 0 to wave 2 serves as a stop-loss. When this baseline gets broken, there is a strong probability that wave 2 (or B) gets more complex, thus wave 3 or C has not begun yet.

Keep in mind that wave 3 is normally the strongest wave and often will go far beyond the upper trendline.

As soon as wave 3 has finished you can draw a channel connecting the end of wave 1 and wave 3 with a trend line and draw a parallel line from the end of wave 2. by Doing this you can project a target for wave 4. Keep in mind that normally the baseline from wave 3 will be broken slightly by the price action of wave 4. If wave 4 doesn’t come near the baseline at all this is a sign of a very strong trend. You are probably still in wave 3 or you should get ready for a blow-off in wave 5.

As soon as wave 4 has finished you can draw a channel connecting the end of wave 2 and wave 4 with a trend line and draw a parallel line from the end of wave 3 and project upward to wave 5. This is your target for wave 5. This would be for a normal wave 5. An extended wave 5 would push higher. If the price fails to hit the projected trend line to wave 5 then the market is weak and you should look for a sell-off. 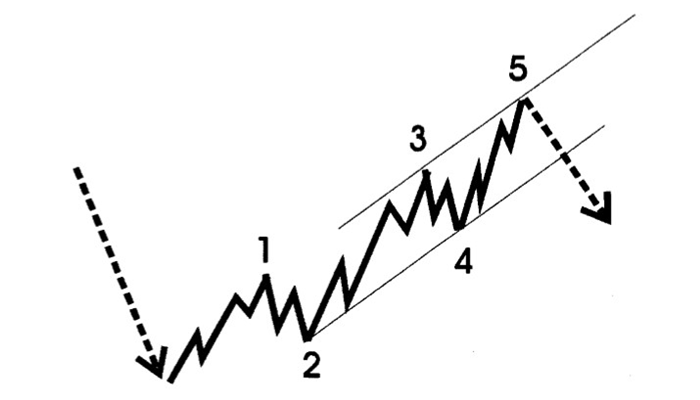 Mostly wave 3 is the strongest wave showing a very fast acceleration relative to wave 1 and 5. If wave 3 indeed shows a nearly vertical rise or decline, then draw a trend line-connecting waves 2 and 4 and draw a parallel line from wave 1. This parallel line will cut through wave 3 and will target wave 5. Experience shows this is a very valuable channel. 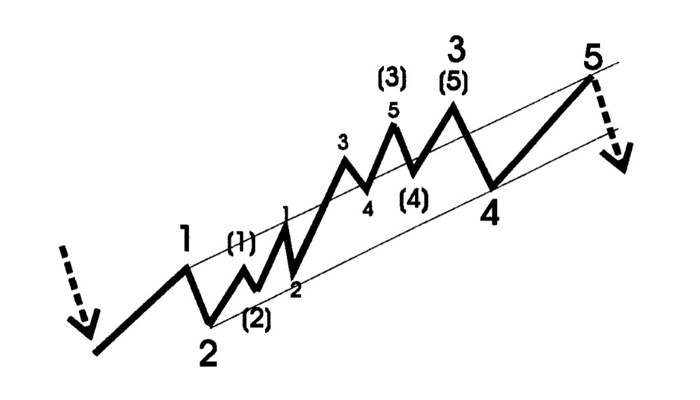 As soon as wave B has finished you can draw a trend line connecting the origin of wave A and the end of wave B to get a target for wave D, provided a triangle indeed is developing, which is more certain after the completion of wave C. 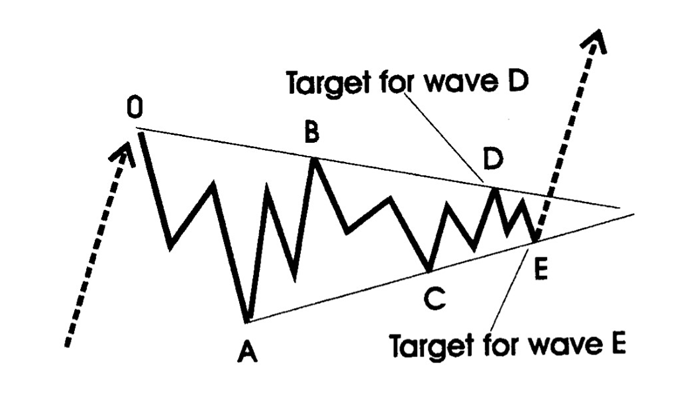 Targets in a Double Zigzag 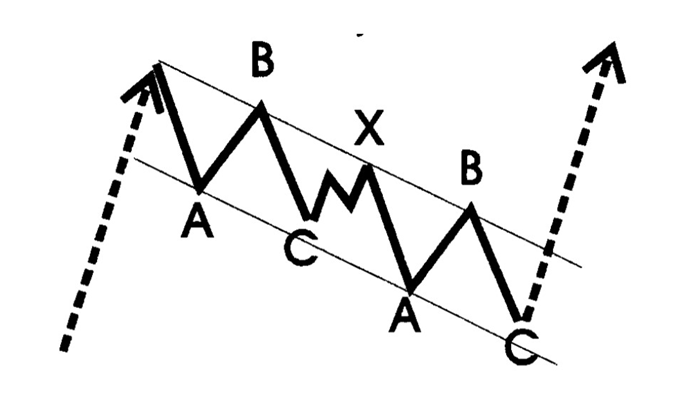 Elliott Wave theory is something that continues to provide a sense of structure to markets for a lot of people worldwide. The ability to constantly shift the theory when a rule is broken can hinder the use of the theory as a means to place trades. However, it also adds a significant degree of clarity to the art of trend recognition. How much complexity a trader wishes to add to R.N. Elliott’s initial rules is up to them, yet it is certainly a method that many choose to place front and centre in their market strategies.

Before trading online, you should be aware that the market is susceptible to prominent levels of volatility and as a result, an asset might experience a breakout or breakdown in a short space of time.

As a result, you should carry out both technical and fundamental analyses on the asset you want to trade before you open a position. We also offer educational resources like CAPEX Academy to help you understand trading and get to know the risks.

Lesson 1: What is Technical Analysis

By examining price action to determine which force is prevailing, technical analysis focuses directly on the bottom line: What is the price? Where has it been? Where is it going?