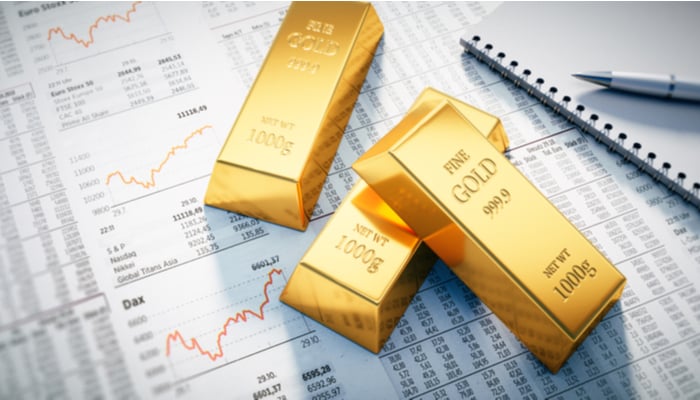 After experiencing a substantial upward momentum, gold price is losing almost $30 per ounce.

The last day of the week continued with significant gains for European and U.S. stock indices.

The better-than-expected results published on Thursday and Friday from companies in the financial sector were the catalysts for these significant upward impulses.

Earnings from Bank of America, Wells Fargo or Morgan Stanley were published on Thursday. Goldman Sachs earnings released on Friday showed better results compared to what the markets anticipated, with an EPS of 14.93 vs 0.14 expected.

Long-term interest rate hikes and increased credit demands after the stagnation that occurred during the pandemic crisis have overall contributed to the improvement of the bank performance. But not only the stocks were the protagonists of these increases. Oil companies, such as Chevron or Exxon, are benefiting from the spectacular rise in the price of oil that reached $82.61, the highest in the last seven years, causing increases in these companies of between 3% and 4 % in the last days of the past week.

DowJones30 index was the one with the most benefits in regards to these market movements, with the greatest weight in these sectors, which gained 1.12% on Friday and broke the resistance of 34.900, closing above it.

The other two North American indices, S&P500 and Nasdaq had very similar performance with gains around 0.70% on the day and with closings right at the resistance levels, without being able to overcome them, of 4470 and 15.170, respectively.

This good performance of the stock markets was also influenced to some extent by the retail sales data for September, which surprised the market with a rise to 0.7% (MoM) compared to - 0.2% expected.

But this better scenario of domestic demand, which at the moment seems to rule out any negative impact on the consumption of the delta variant of the coronavirus, also has another reading in that it could increase the inflationary tensions that have been observed in recent months, in fact, and after the figure was known, the 10-year American bond fell in price with an increase in yield of almost 4 bps.

Currently, the market is betting with greater conviction on the start of tapering as early as next month and even with increases in the reference rates by the Fed next year. Consequently, GOLD, which in the previous days had experienced a substantial upward momentum due to the falls in the yields of Treasury bonds, fell sharply, losing almost $ 30 on the day.

Technically, it has not managed to overcome the resistance of 1785, in a weekly closing, so it is within a trading range between this level and the previous supports that are found, first in 1726 and 1685 later, this being a critical level, below which the upward trend of the last three years would be terminated.