After Friday's non-farm payroll figures in the United States, the dollar lost ground against all its peers, while gold gained.

Although the U.S. Treasury bonds yield recovered all the lost territory when the figures were published, with the 10-year benchmark trading around 1.60% again, the dollar remains under pressure during the start of the European session on Monday.

In reality, the figure was disappointing compared to forecasts. Only 266k jobs were created in the non-agricultural sectors in April 2021, against the 978k expected, while the unemployment rate jumped to 6.1% when a drop to 5.8% was expected. The only positive figure was describing the average hourly gains that surprised with a rise of 0.7% against 0.1% expected. Under normal conditions, this figure would augur well for the recovery in employment. However, in this case, it does not match the other weak published statistics and could re-ignite inflationary fears.

GOLD is one of the assets that appear to benefit the most in this market scenario with a weak dollar, potential inflation and the Fed's low-interest rates policy due to a labor market that is not recovering at the desired rate. At the same time, these are the fundamental factors that support the precious metal. From a technical point of view, gold has broken up the first resistance levels and is approaching the Fibonacci retracement level of 0.618 of the last bearish leg that began earlier this year, located at 1851. Above this level, this trend would be over, and resistance would only be encountered in the 1876 area, above which it would move to areas above 1900. 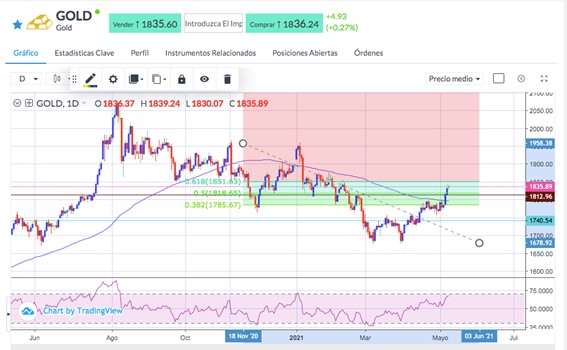 On the other hand, the main debate in the market centres around the "tapering" of central banks. While the Federal Reserve has ruled out this possibility for the time being, given the recently released poor employment figure, both the European Central Bank and the Bank of England are already openly expressing their intention to do so. ECB members have stated today that this possibility will be evaluated as soon as next month, depending on economic and epidemiological data. The Bank of England, in its meeting last week, also covered this topic.

For this reason, both the euro and the pound have risen significantly against the dollar. The GBP/USD pair has technically broken to the upside, surpassing the unreached levels of last February, past the 1.4000 area and heading towards the 1.4230 high level, which now acts as a resistance level. 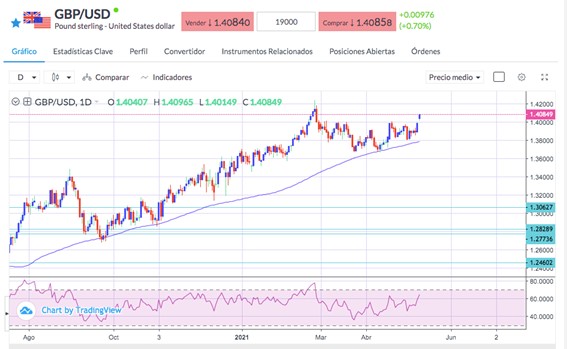